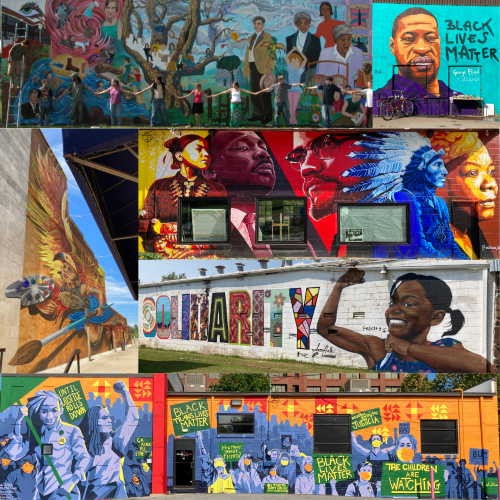 If art imitates life, how do you see yourself and our world in Fayetteville murals?

If you can’t join us for one of our mural bike tours, you can use the resources below to go on your own self-guided tour across Fayetteville. There are two routes to choose from, both of which are close to the University of Arkansas campus. Resources on how to rent a bike, maps, outdoor safety, and discussion of social justice and unity can also be found below. When visiting these murals keep the three questions below in mind:

Visit this map to learn more about the specific routes that we recommend for visiting local murals.

UREC Outdoors has a bicycle for you. We offer high-quality Marin  mountain bikes for hitting the local trails and Marin hybrid bikes that are perfect for long rides around town or on the Razorback Regional Greenway.

Located on the side of the Laundro-mat on 15th street in Fayetteville.  This mural depicts a yound black girl showing solidarity, strength, vibrancy, and diversity of life. 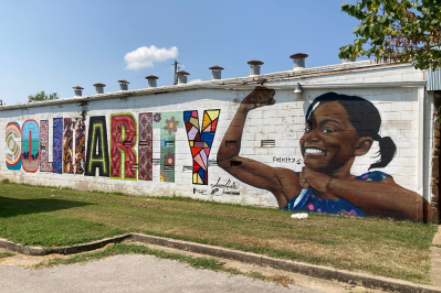 Power to the People

Power to the People by Octavio Logo - @octoavio_logo 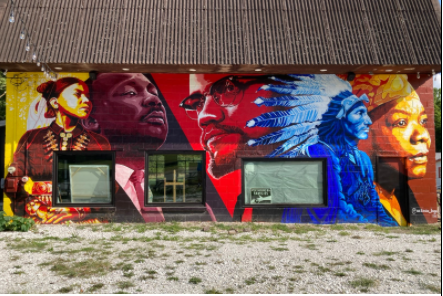 Located on the same building as Power to the People this mural depcits George Floyd an unarmed black man killed by police during an arrest in Minneapolois, MN in May of 2020. 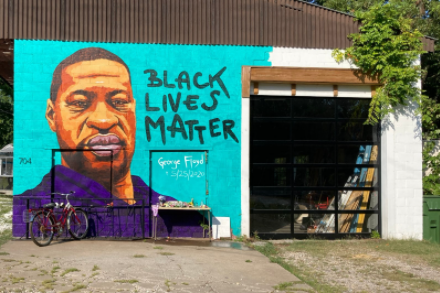 Located within Walker Park, this mural depicts a swirl of nature along with the many different people that make up a community like Fayetteville. Created by the two artists who were working with a class in high school called School Within a School

“She had been working with this class in Fayetteville High School, called a School Within a School. They had already been doing some research into the history of South Fayetteville, which was the topic of the mural. So, they had a lot of sketches and a disorganized pile of ideas.”  - Eugene Sargent

“Once we got painting, we had not only the school within a school kids, but we hosted several groups of elementary school kids and passersby got involved, and I know one 3-year-old painted on it. So, it turned into a project that felt like a lot of people had gotten involved in it. What was different about this project is that everyone who approached the wall had a different level of experience and some of them may have never painted a wall before with real artist colors.” - Eugene Sargent

“I would say that that was the most rewarding part of it, seeing each kid getting this new experience. I know that a couple of the school kids actually are still artists, and this was one of their formative experiences. The other thing was that it really felt like a community project, and even just people walking by were so fascinated to learn about the process and actually be able to participate.”  - Eugene Sargent 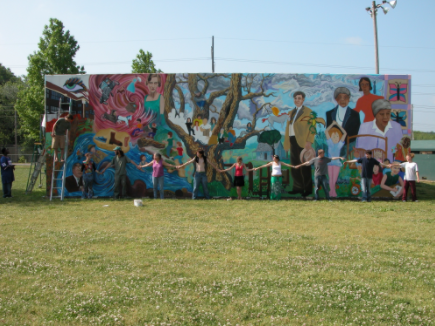 Harvesting the Winds of Change

Located right off historic Dickson Street, this mural’s inspiration is derived from the artist. “I’m Mexican, muralism and public art is my heritage,” said Logo, “When I came here I was like where are the murals? Where is the art?” Logo said the messages within his work are a combination of things. “It’s my own need to say something, but at the same time I am trying to channel others’ messages,” said Logo. 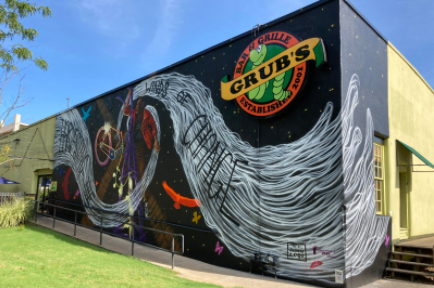 Better Together by Matt Miller - https://www.mattmillerstudio.com/

Located right off the Fayetteville Square this mural shows Black and White children embraced while standing and walking together. 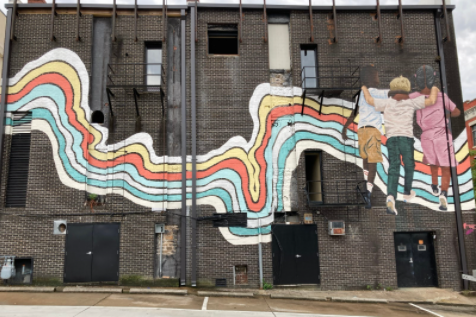 The mural, located in the narrow alley west of the Arvest Bank building on the north side of the square, features a warrior named Athena whose sword and shield are traded for a paint brush and palette to signify the power of art.

"We had been discussing, a lot about the feminist aspects of the piece, and how she was, you know, a strong artist warrior woman, and so that’s how the spear got replaced with a paintbrush, and the palette was front and center. We had this idea of putting, you know, our female heroes in the eyes of the tailfeathers, and we each chose a few, let other people choose some of the others.” -Eugene Sargent 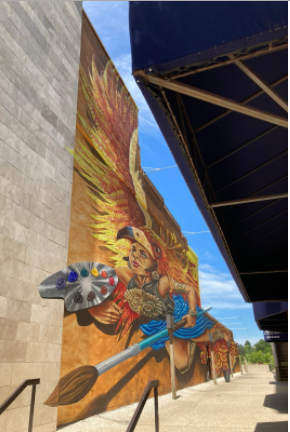 No Justice No Peace

This mural depicts a colorful, yet bold call for unity in Fayetteville.

It's Fayetteville for Me

It’s Fayetteville For Me by Austin Hunter Floyd

This mural shows a colorful outlook of Fayetteville from the perspective of the woman painted on the mural. 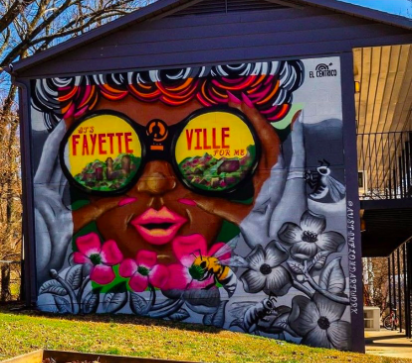 Other Murals and Additional Resources 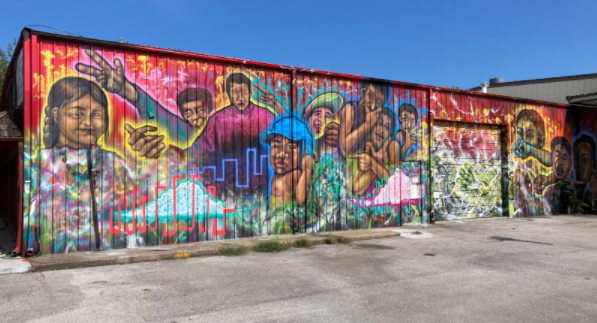 Located on MLK, this mural is passed by thousands of people daily and colorfully remakes to all “Love Unites Us”, though over the past years it has also been the target of many defacements.

Holding On and Letting Go Mural

Holding on and Letting Go by Stacy Bates: https://www.stacybeeart.com/

Located on an old railroad tunnel this mural depicts the hands of a Native person holding a feather wand backed back a tightly woven basket and portrays the strength and sacrifice of the Cherokee people.

What inspired you and what does it represent or mean? “I had previously created a Native American piece focusing on the history of the transcontinental railroad and how it divided the land of the Native people. It was something I had been researching and when the opportunity for this mural came up, I was very interested in creating another piece. The piece to me has a lot of different meanings and symbols throughout. But overall, to me, it shows the strength of the Cherokee (Tsa La Gi) people and their culture to have survived the brutal conditions of the Trail of Tears. It's also about the Cherokee trying to hold on to their culture and family through this time period but also being forced to let go of their lands.”

What message would you give to students looking at your work? “When looking at "Holding On and Letting Go" it's important to see the entire area and to know that a railroad track once ran through the tunnel and that a current railroad runs atop the tunnel. It's very representative of how the transcontinental railroad was built through the lands of Native Americans and yet still, they showed their strength to survive. Their strength is shown in the strong hands holding the feather wand and the tightly woven basket weave in the background. The feather wand represents the Cherokee culture showing 7 feathers. The Cherokee have seven clans, seven councilors, they made a sacrifice on the seventh day, would make a sacrifice every seventh year and they believe there are seven different directions.” 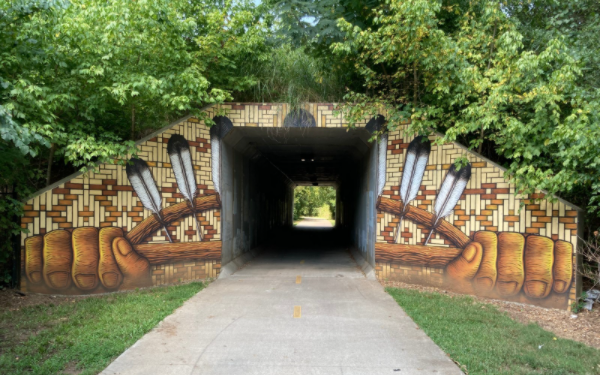